Home Platforms Cynthia Villar and Her Platforms
Share on Facebook
Tweet on Twitter
Cynthia Villar dubbed as Mrs. Hanapbuhay is a 2013 Philippine general elections candidate for senator of the Nacionalista Party, the oldest political party in the Philippines presided by her husband Senator Manuel Villar. Cynthia Villar is also included in the administration coalition’s senatorial state which is endorsed by President Benigno Aquino III. 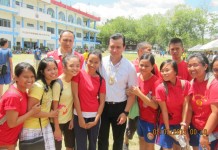