Local elections will be held in Hadji Panglima Tahil, Sulu on May 9, 2016 within the Philippine general election. The voters will elect for the elective local posts in the municipality: the mayor, vice mayor, and councilors.

Hadji Panglima Tahil (formerly known as Marunggas), a sixth income class municipality in the province of Sulu, has a population of 5,850 people, according to the 2010 census.

It is politically subdivided into 5 barangays. 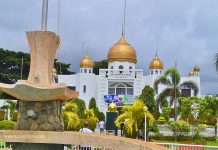