The Commission on Elections (COMELEC) said Friday (January 22) that voters might see one man running for mayor of Bongao, Tawi-Tawi on May 9.

Jimuel Que and his vice mayor aspirant are running unopposed for the coming 2016 local elections.

The present mayor of Bongao, who is qualified to seek reelection for a third term, said he decided not to file a certificate of candidacy (COC) so he can campaign well for LP’s presidential bet, Manuel “Mar” Roxas II, and for ARMM Gov. Mujiv Hataman, who is aspiring for a second term.

Jasper Que is related by blood to LP member Sulu Vice Gov. Sakur Tan, who has filed his COC for ARMM governor without permission from the party.

Bongao, a second income class municipality and the de facto capital of the province of Tawi-Tawi, has a population of 79,362 people, according to the 2010 census.

It is home to the Mindanao State University - Tawi-Tawi College of Technology and Oceanography (MSU-TCTO), and is famous for its mountain shaped like a plateau, reminiscent of South Africa’s Table Mountain. 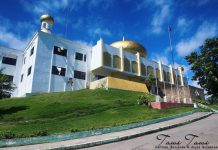