Cynthia Villar is a politician who is the member of the House of Representatives for the Lone District of Las Piñas City. She is the sister of Las Piñas mayor Vergel Aguilar and the wife of Senator Manny Villar. She was first elected to Congress in 2001 and served three consecutive terms.

She practiced as a financial analyst and college professor until she married Former House Speaker and Senate President Manny Villar in 1975. Cynthia Villar then helped her husband in various entrepreneurial ventures, eventually making Vista Land the biggest homebuilder in the Philippines. She managed a private development bank from 1989 to 1998.

In 2001, Cynthia Villar won in a landslide victory as Representative of Las Piñas to the Philippine house of representative. Where she remain for 3 terms lasting 9 years. She has always been unanimously elected as president of the Lady Legislators of the 12th, 13th and 14th Congress, leading the way in initiating activities aimed at advancing and protecting the welfare of women, children and family. From 2004 to 2010 Cynthia Villar has been Chairwoman of Committee on Higher & Technical Education of the House of Representatives.

Cynthia Villar served as chairperson of the Congressional Spouses Foundation from 1998 to 2000 and during her term built 11 regional centers for women who have fallen victim to abuse. She served as president of the Senate Spouses Foundation, Inc., from August 2006 to December 2008, during which the Foundation raised twenty five million pesos for the rehabilitation of charity wards at the Philippine General Hospital. 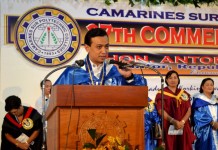