2013 senatorial candidate Richard Juico Gordon, better known as Dick Gordon, is the current chairman of the Philippine National Red Cross and a broadcaster for News5. He also hosts the radio show Aksyon Solusyon with Amelyn Veloso on Radyo5 92.3 News FM and the television show Duelo: Barilan ng Opinyon on AksyonTV.

He was the Mayor of Olongapo City in 1980. During his term as mayor, Olongapo soon became a highly urbanized city and it was converted from being a “sin city” into a “model city” by raising police accountability through I.D. systems, proper health and sanitation, waste management and the strict observance of color-coding in public transport.

In 2004, Dick Gordon was elected as Senator under the senatorial ticket of President Arroyo ran for President and in the 2010 presidential elections, he ran as the standard-bearer of Bagumbayan - Volunteers for a New Philippines but was unsuccessful.

As a senator, Dick Gordon authored the National Tourism Policy Act of 2009 or Republic Act 9593, declaring a national policy for tourism as an engine of Investment and employment, growth and national development. He was also responsible for the passage of Republic Act No. 9369 — or the Automated Elections System to obviate cheating and post election controversies and protests that hound Philippine elections.

Among the names found in this list, who will you probably vote for as MAYOR of Muntinlupa City, if elections were held today? 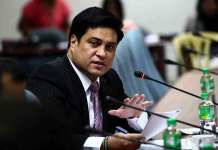 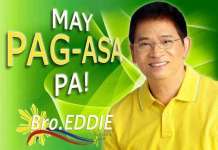